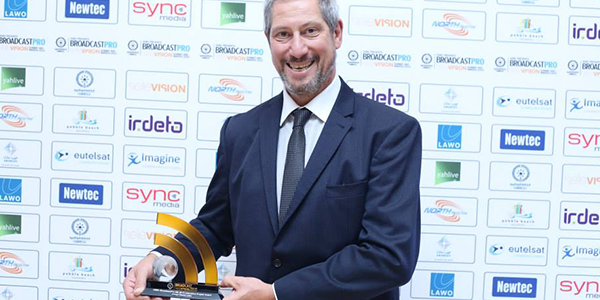 Amagi, a leader in cloud-based broadcast infrastructure and targeted TV advertising, has won the ASBU BroadcastPro Middle East 2015 Innovative Project Award for successfully monetizing NDTV’s global feeds. Amagi’s STORM regionalization platform enabled NDTV, a pioneer in television news in India, to regionalize advertisements in the Middle East without disrupting the existing workflow and satellite infrastructure or incurring significant CAPEX and OPEX. The award was presented to Amagi during a special ceremony held on Nov. 10 at the ASBU BroadcastPro Summit in Dubai.

“We are honored to receive this prestigious industry award,” said Srividhya Srinivasan, co-founder of Amagi. “Today’s TV networks need an efficient and cost-effective solution for content regionalization. The NDTV project is a great example of how broadcasters can monetize their channel on a global scale, without setting up a separate and expensive satellite feed.”

This is the second industry award for Amagi’s STORM regionalization platform this year. STORM was also honored with the IBC2015 Innovation Award in September for enabling Sundance Channel Global to deliver localized channels at a fraction of the cost of traditional broadcast models.

As part of the STORM solution, Amagi inserts unique, invisible and inaudible watermarks on ads that need to be replaced in the Middle East. Using trickle satellite bandwidth, NDTV can deliver local replacement ads and the playlist on the common satellite feed. Installed at various headends in the region, Amagi’s STORM IRDs receive the common satellite feed, recognize the watermarked ads, and then replace them with the local ads as per the local playlist. Amagi’s innovative solution enables NDTV to regionalize ads in the Middle East without disturbing the existing workflow and satellite infrastructure.

The ASBU BroadcastPro Awards are organized by BroadcastPro Middle East, a well respected and leading broadcast magazine in the MENA region. The event is endorsed by the Arab States Broadcasting Union (ASBU), a dynamic pan-Arab organization involved in establishing and maintaining best practices in the field of broadcasting in the MENA. The contest covers a broad range of categories to reward excellence in various fields across the broadcast workflow, from production and post-production to traditional broadcast and new media platforms.