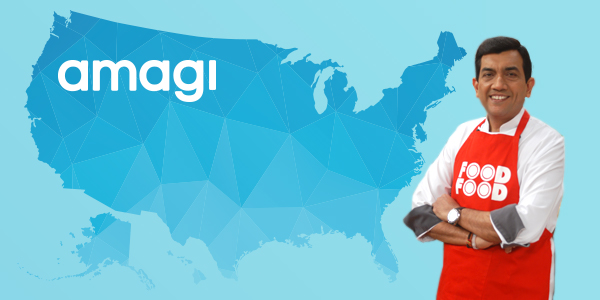 “Since we launched in 2011, Food Food channel has been building an enviable viewership, not only in India, but also across the U.S., Canada, UAE, Qatar, and Mauritius,” said Sanjeev Kapoor, co-founder and director, Food Food. “However, till now, we had been broadcasting a common feed to all our markets of operations. Owing to popular demand for our programming, creating dedicated international feeds was a natural step in consolidating our position as a food and lifestyle channel of choice.”

“Using traditional broadcast models, Food Food channel would need to create a separate playout infrastructure for each international market. This would not only be expensive, but it would also limit the channel’s ability to scale rapidly in new markets. In contrast, Amagi CLOUDPORT is a low CAPEX and OPEX cloud broadcast model, with unprecedented scalability to expand into non-contiguous geographies as needed by Food Food channel,” said K.A. Srinivasan, co-founder, Amagi. Amagi enabled Food Food channel to push all its content assets to a secure Amazon Web Services cloud. Using a web-based UI, the channel’s operations team was able to import schedules, add dynamic graphics, create playlists, and manage the entire content asset library to create a new international feed. Amagi installed its CLOUDPORT edge playout servers at operator headends. Through a simple business internet connection, playout-ready content was pushed to the edge servers. The server then played out the content as per defined playlists and schedules, offering audiences a feature-rich, world-class playout and viewing experience, in HD format, 24x7.

The channel’s international feeds using Amagi’s cloud technology are distributed in the U.S. through Dish TV, and in Mauritius via Mauritius Telecom. “Amagi made it simple and cost- effective, helping us to launch entirely new feeds in less than two months. Further, with its edge-based playout architecture, we now have the ability to localize content in the U.S. and Mauritius, and support regional advertisers in the future”, added Kapoor.

Since all its content is now on the cloud, Food Food channel can easily expand into new geographies, significantly reducing go-to- market timelines. From any remote location, the operations team at Food Food can manage the entire channel operations through a simple, yet sophisticated, web-based UI. Complete with 24x7 monitoring, Amagi CLOUDPORT is a comprehensive, scalable, and reliable channel playout solution that addresses current and future needs of Food Food channel.

For more information about Amagi and its cloud-based broadcast solutions, visit https://www.amagi.com

Food Food, India’s first 24X7 food and lifestyle channel, is owned by Turmeric Vision Pvt. Ltd. (TVPL). Food Food was conceptualized by Padmashri Master Chef Sanjeev Kapoor, the most celebrated face of Indian cuisine today, TV show host, author of bestselling cookbooks, restaurant consultant, architect of a unique range of food products, and winner of numerous awards. Turmeric Vision Pvt. Ltd. (TVPL), owner of India’s first TV and lifestyle channel Food Food, intends to become India’s first food content company that will create food content and food entertainment brands to be distributed through multiple platforms like television, web, and mobile. To achieve these goals, TVPL is geared up to go to the next level where most of the Indian broadcasters have not yet reached. Unfolding of its great story in digital, i.e., all across website and social media, is the evidence of the preparedness. TVPL has recently also branched out in e-commerce and has successfully launched its own branded products. Mogae Consultants Pvt. Ltd. headed by Mr. Sandeep Goyal, is a diverse group with interests in advertising, media and online businesses. Currently Mogae is a JV partner in TVPL.

Amagi is the world’s first cloud-managed broadcast services and targeted advertising solutions company. Amagi brings simplicity, advanced automation, and transparency to the entire broadcast operation, be it for traditional TV or next-gen multiscreen platforms. Amagi has deployments in over 40 countries, enabling TV networks to launch, operate, and monetize channels anywhere in the world. Amagi also provides targeted advertising solutions to 2,500+ brands, shaping the future of TV advertising. Amagi Corporation is based in New York, with offices in London, Hong Kong, New Delhi, Mumbai, and the R&D center in Bangalore.