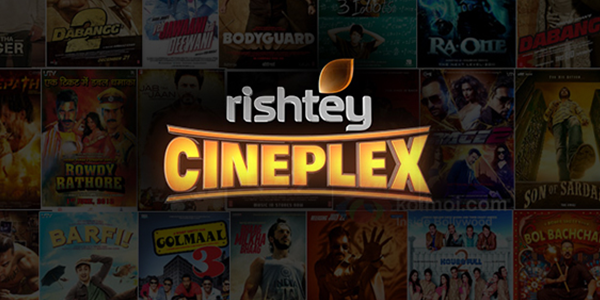 Amagi, the pioneer in cloud-based managed broadcast services, today announced that Viacom18 has launched Rishtey Cineplex in the U.S., using its CLOUDPORT managed services. Rishtey Cineplex is a Hindi movie channel that airs Bollywood movies, along with Hindi-dubbed South Indian movies. The channel is part of a growing bouquet of offerings from the Indian media and entertainment conglomerate Viacom18, a joint-venture between Viacom Inc. and India-based TV18 network.

“Indian films are a powerful and popular medium of entertainment globally,” said Sudhanshu Vats, Group CEO at Viacom18. “Launching Rishtey Cineplex helps us ride the wave of inherent relationship between the expatriate Indian population and the sense of cultural inclusivity that our films evoke. Associating with Amagi, we are enhancing our footprint across the U.S. market, cementing the same home connection our network has built for viewers here.”

Hosted on a secure Amazon AWS cloud infrastructure, CLOUDPORT service integrates with third-party partners to deliver the channel feed to Dish® TV in the U.S. for distribution. Amagi’s edge playout server creates a world-class entertainment experience for the channel’s viewers, playing feature-rich graphics and DVE based on the channel playlist. Furthermore, CLOUDPORT gives Viacom18 tremendous flexibility to expand into new regions, as all of its content assets are now on the cloud.

“Adopting new age technology and giving our viewers a heightened viewing experience have always been key focus areas of our organization,” said Raj Nayak, CEO, Hindi Mass Entertainment at Viacom18. “With the help of Amagi’s state-of-the-art technology, Rishtey Cineplex’s enviable movie library will come alive for all of our viewers residing in the U.S. It will also help in streamlining the broadcast operations workflow, thereby increasing efficiency.”

“When we decided to launch the channel in the U.S. market, we were looking for a partner who could provide us an efficient delivery of our channel at significantly lower costs compared to traditional methods,” said Anuj Gandhi, Group CEO, IndiaCast, a Viacom18 and TV18 venture that manages distribution and monetization for the group’s channels. “Amagi’s CLOUDPORT is one of the most advanced and automated managed services platforms, providing Viacom18 with complete transparency and control of its broadcast operations and delivery in a cost-effective manner. This allows the broadcaster to focus attention on customers and business growth, rather than be slowed down by every day operational challenges.”

“Viacom18, with its wide array of Bollywood content, is an exciting network to watch out for in the U.S. market. Amagi is proud to be their managed services partner of choice,” said K.A. Srinivasan, Co-founder at Amagi. “Through CLOUDPORT, we have been able to automate most of the key workflows, making the entire broadcast operations simple yet sophisticated — at a fraction of cost of traditional broadcast models.”

Viacom18 Media Pvt. Ltd. is one of India’s fastest growing entertainment networks and a house of iconic brands that offers multi-platform, multi-generational and multicultural brand experiences. A joint venture of Viacom Inc. and the Network18 Group, Viacom18 defines entertainment in India by touching people on air, online, on ground, in shop and through its cinema.