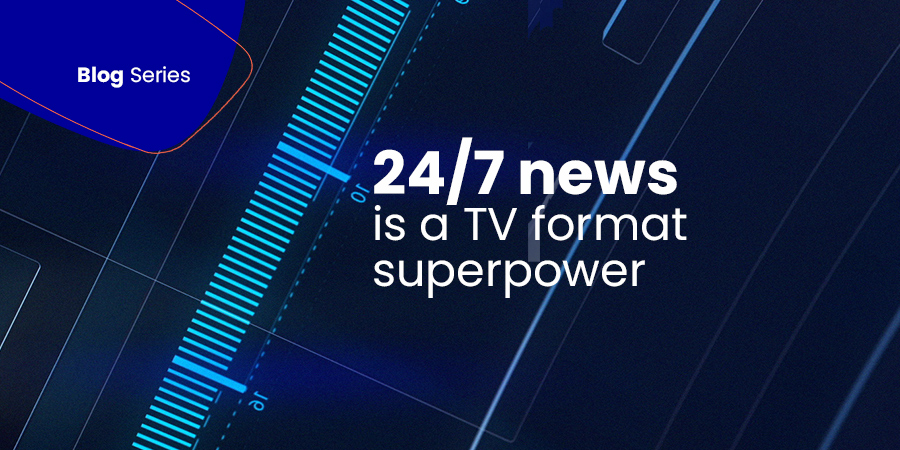 News on a 24x7 rocket. Work for a News brand? Strategizing 24/7 FAST channels? My first eBook with data & insights on changing TV viewership that you can’t find anywhere else is here! Read on for more.

This is the first in a four-part blog post that focuses on helping News brands build the best 24/7 streaming news channels that a modern cloud stack has to offer.

The stage is set

News on a 24x7 rocket. If you work at a News brand and are evaluating a FAST channel, we are curating a range of new data that we’ll be rolling out over the next two months to help you model and strategize the growth opportunity in News.

But let’s start with two data points published by the Variety Intelligence Platform in the past year as part of their tent-pole series, “Fading Ratings.” 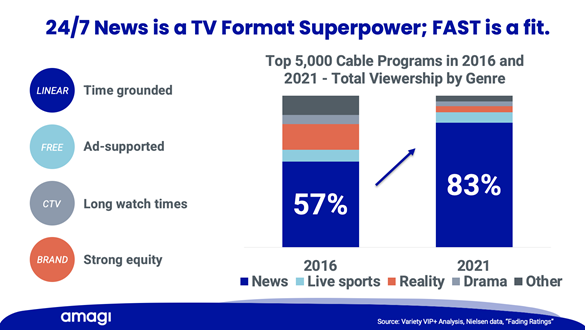 (For an eBook including proprietary TV survey data on News viewership, go to: Amagi.com/News)

Second, diving into News only, an analysis of Prime Time Cable TV News Network viewership using Nielsen data from 2014 and 2021 yields more color. In 2014, prime time average viewership across all cable news networks added up to about 3.5 million viewers. That number rose 66% to 5.8 million viewers by 2021.

To me, the through-line is clear:

Media visionary Ted Turner understood this well and unleashed CNN in June 1980. In fact it took sixteen years - and the watershed TV News event that was the Persian Gulf War - for the next two 24/7 News channels to launch. During the early days of Iraq’s invasion of Kuwait, CNN was the only network able to bring live coverage – including Bernard Shaw – from inside their Baghdad hotel as the US began a bombing campaign. The ratings shot past the big three networks and cable news began a long path of secular growth. Under Rupert Murdoch, FOX News launched in 1996, and MSNBC launched under the direction of Tom Rogers that same year.

The growth of FAST – free live linear streaming -- on connected TVs is today making that 24/7 superpower available to a much wider array of News enterprises.

These CTV platforms, according to The CTV Advertising Report, June 2021, are in over 84% of US homes. We’d guess most of those are prominently placed inside the home - on a living room wall, front-and-center on a TV stand, or on top of a bedroom chest.

That’s where your News brand can live as important stories break and evolve and your programming keeps audiences feeling informed and synchronized to the world around them.

We don’t typically think about a linear channel as an “on-demand” experience.

But in the News genre, a well-crafted sequence of fresh updates is quite efficient at delivering ‘instant gratification’ as news consumers tune-in to catch-up to the latest.

We agree. Next: how?

If you agree with the premise, the bigger question is, How? How can you possibly provide 24 hours of live programming a day?

First of all, truly live, original news coverage is not needed 24/7/365. In the next post, we’ll discuss how important it is to go live during moments of breaking news. But even the most successful 24x7 cable channels have re-airs and repeats as a regular part of their programming wheel, particularly in the midnight to 5am time slots.

And it’s worth noting that average audiences for the evening newscasts of ABC, CBS and NBC have held steady or grown, according to Comscore TV Essentials® data, in the period of 2016 to 2020 – even with only one hour of news.

To understand how to supply an engaging linear feed 24/7, Let’s dive into the art and science of the programming wheel.

A history of TV scheduling is outside the scope of this post, not to mention my expertise, but readers looking for depth on the subject will find it here. A few notable phrases are provided below to get a taste of the prevalence and primacy of local news throughout TV’s history:

“5 AM - 7 AM: Local news programming aimed at farmers and early-rising businesspeople. Often a short news/weather update and farm price information was given to help the early risers get some information before they got the paper off the doorstep.

7 AM - 9 AM: Morning news and talk shows (Today, Good Morning America) produced by the network, with approximately five minutes per half-hour of local-affiliate time for local news and weather updates.”

The allure of scheduling a live linear channel from Monday morning to Sunday night is that these channels can – and do – weave their way into viewers’ daily and weekly lives.

At the same time, we also know that retaining eyeballs is a different exercise than acquiring them. Lead-ins, channel branding, and on-air promo techniques have developed over decades of time to help retain viewers and they haven’t lost their usefulness in the era of free linear streaming.

Au contraire, investment in this domain will be critical as new channels balance proven techniques with innovation.

The good news is that whether you plan to produce 3 hours of live news or 13, today, we have more capabilities to help enhance and automate the 24x7 programming wheel than ever before.

A foundational key is to weave live and pre-recorded content in new ways to create success.

What are those capabilities and how can we integrate them into our programming strategies? That’s the role for the next three posts in this series. Here is a preview of questions that we will explore.

Until then, stay tuned with our updates and request our eBook of data on the News landing page at: Amagi.com/News

Authors' note
Want to know how or why to launch a free streaming TV news channel for connected TV? Want to debate buzzwords like FAST & AVOD to understand what’s different about today’s video landscape? Or are you focused on the MCR operator experience? And the economics of migrating playout to the cloud?

Visit Amagi.com/News for an updated collection of stats, videos, TV survey data and other insights – all dedicated to the News genre – you can’t find anywhere else.